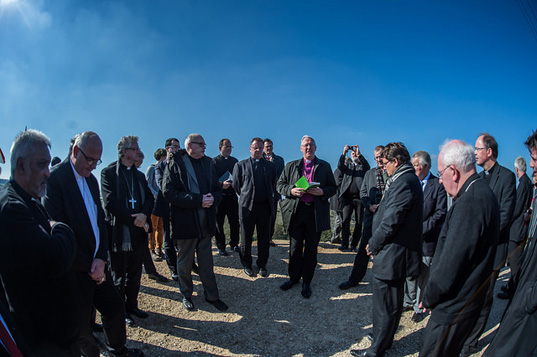 Bishops from around the world pray for peace in the town Sderot on the border with Gaza.
(photo: Catholic Bishops’ Conference of England and Wales)

Carl Hétu is national director of CNEWA Canada. He accompanied Canadian Bishop Lionel Gendron and 15 other bishops from around the world in a recent visit to the Holy Land.

Not too many people are familiar with Sderot, an Israeli town right beside Gaza — just over a mile away. The bishops visited the city since its population was subjected to most of the Hamas rockets fired from Gaza during the 51-day war last summer.

At first glance, this beautiful town of 24,000 is modern, well-kept, and clean — it looks like a typical town in the Western world. But many people since 2008 have moved out; many others just can’t, because they have no other choices.

You can’t see any significant damage; the town was cleaned up quickly and any destruction was minimal compared to what happened just a short distance away in Gaza. But what is most serious is the damage you can’t see. Many people here suffer from post-traumatic stress.

Apparently, there are no other towns in the world that have has as many bomb shelters.

One resident shared with us, “Actually, my wife and I never had enough time to take shelter, so like many others, we hoped the rockets wouldn’t fall on our house. And even if we made it to safety, the problem remains. When rockets are coming your way, it will leave you in shock.”

Shaking his head, he continued, “But it wasn’t like this before. We had good rapport with the people of Gaza and them with us. They worked here; we bought their produce and used their facilities at their beaches. Now we can’t even talk, yet alone meet. Everything is blocked with this wall. We are living in two distinct worlds. It shouldn’t be like this. I don’t know how this happened.”

After leaving Sderot, we were left to think: this war has left people deeply injured and they believe the worst is yet to come. There has to be a way to find peace.

As Pope Francis called on us to do during his trip to the Holy Land last May, we shouldn’t forget to ask God to give us the courage to leave our comfort zones and seek new ways to find peace.

We should never think of war as an alternative. It only makes things worse, especially for innocent families.

The War in Ukraine: A Call to Prayer, Fasting, and Action