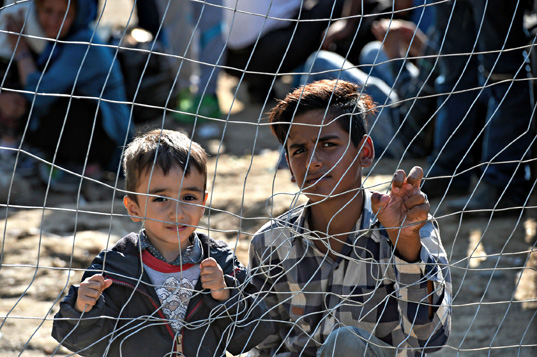 Migrant children look through a fence as they wait permission to cross the border between Greece and Macedonia on 15 September. (photo: CNS/Georgi Licovski, EPA)

The statement below was issued by the Canadian Conference of Catholic Bishops (CCCB) in response to the initiative announced yesterday to aid Syrian refugees:

The Canadian Conference of Catholic Bishops (CCCB) has endorsed a joint fundraising campaign aimed at involving all the Church in Canada in order to assist Syrian refugees seeking shelter and protection in the Middle East and parts of Europe. The joint campaign, already being supported by Bishops across the country, involves the Canadian Catholic Organization for Development and Peace, Aid to the Church in Need (ACN) Canada, and CNEWA Canada.

The three Canadian Catholic aid and development agencies will collaborate in their fundraising for Syrian refugees, so as to respond as effectively as possible to the complex and overwhelming Syrian emergency. Donations can be made to any or all three of the organizations. Each will continue working with its respective partners in the Middle East, using its own unique approaches and networks. The Holy See, as well as Bishops in Canada and the Middle East, have expressed appreciation on how the activities of the three agencies are mutually complementary in responding to different but equally important priorities.

Development and Peace will work to expand its ongoing efforts to support Syrian refugees in neighbouring countries in the Middle East, and also expand its reach through the Caritas international family to come to the aid of the thousands of migrants who have fled across the Mediterranean Sea and are now seeking shelter. ACN and CNEWA will continue to support all refugees affected by this war and will also give special attention to Christian refugees and displaced persons, hoping to ensure a continued Christian presence in the Middle East.

The three agencies will later send reports to Foreign Affairs, Trade and Development Canada on the total funds received for Syrian refugees as a result of the new campaign. The Government of Canada announced on September 12 it has established the Syria Emergency Relief Fund. Every eligible dollar donated by individual Canadians to registered Canadian charities in response to the impact of the conflict in Syria will be matched by the government, for up to $100 million, effective immediately and until December 31, 2015.

At a special meeting held during the 2015 Plenary Assembly, the Conference’s Permanent Council stated it rejoices at the news some Canadian dioceses and eparchies have already launched or will soon launch their own projects in aid of Syrian refugees. The Permanent Council, which is the CCCB administrative board, encourages those dioceses and eparchies to support the joint campaign. All other dioceses and eparchies in Canada are invited to organize their own parish collections for the joint campaign from now until Sunday, November 15, 2015, inclusive. Each diocese is free to decide how it will distribute the funds among the three national agencies.While the Government of Canada will match funds raised for Syrian refugees by all registered Canadian charities, only a few of these, including Development and Peace, are designated by the government as eligible to apply for its assistance in their work on behalf of Syrian refugees.

The total funds raised by Development and Peace, or other designated Canadian agencies, will not be a factor in the amount of government funding that can be requested for Syrian refugee projects.

Development and Peace, Aid to the Church in Need Canada, and CNEWA Canada have been actively fundraising for refugees from Syria and other Middle Eastern countries for some years. This spring, Development and Peace, in its earlier 2013 campaign with the Bishops of Canada, had raised more than $13 million for Syrian and Middle Eastern refugees. This also included matching funds from the Government of Canada. Recently, Aid to the Church in Need, a pontifical foundation which fundraises in a number of countries, including Canada, reported its previous efforts had raised $10.3 million in emergency aid for Syrian refugees. CNEWA is a papal agency that fundraises in Canada and the United States and works closely with Eastern Catholic Churches and Orthodox Churches in Asia, Africa and Eastern Europe. In 2014, CNEWA (Canada and USA) sent US $4,441,665 to help Syrian refugees in Lebanon and displaced persons in Syria.

According to the United Nations Refugee Agency, the Syrian conflict has resulted in the largest humanitarian crisis since the Second World War. After five years of conflict, some four million Syrians have sought refuge in neighbouring countries in the Middle East as well as in parts of Europe. In addition, there are hundreds of thousands of Syrians displaced and homeless within their own country. Calling again on the world and the Church to help these “millions of people … in a distressing state of urgent need,” Pope Francis has described the conflicts in Iraq and Syria “one of the most overwhelming human tragedies of recent decades.”

To contribute to this effort, please visit this giving page.

Bringing Joy, Celebration to Those Who Suffer in Ukraine