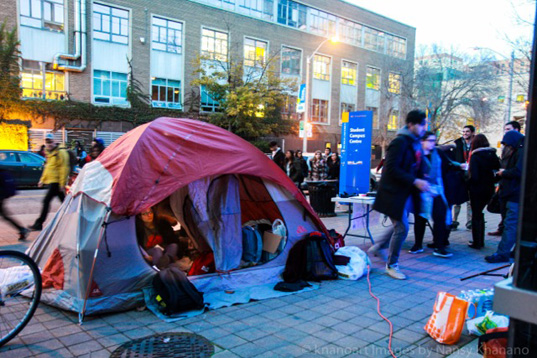 We want to highlight the amazing efforts of the Assyrian Chaldean Syriac Student Union (ACSSU) of Canada. This group is making a difference to help Iraqi and Syrian refugees — and doing it in a very dramatic and thought-provoking way.

From 16-19 November, in an event dubbed “Life of a Mesopotamian Refugee,” students in the greater Toronto area camped in tents for three nights on different university campuses. These young people wanted to raise awareness and be in solidarity with refugees from their homelands. They also collected donations, which will go towards CNEWA Canada’s efforts to assist refugees.

This student initiative was featured in a video on CityNews television in Toronto. It was also in newspapers, including an article in the Catholic Register.