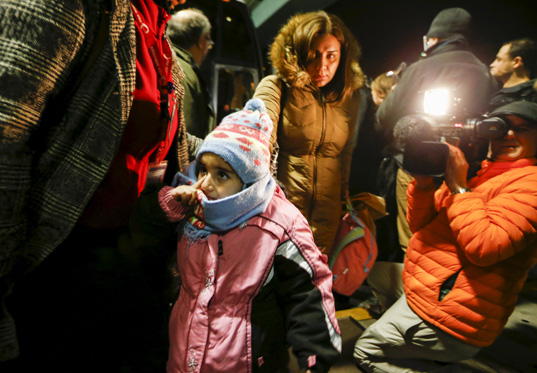 Syrian refugees arrive in December at a hotel in Mississauga, Ontario. They were greeted by Canadian Prime Minister Justin Trudeau, who has pledged to resettle 25,000 Syrian refugees by the end of February. But the refugees are arriving with no sign of peace in the region, which could mean many more of them will need help in 2016. (photo: CNS/Mark Blinch, Reuters)

Editor’s note: the following appeared this week in a column in Canada’s Catholic Register.

During recent travels in Beirut I met Kamal and his family, Syrian-Armenian Christian refugees. They told a harrowing tale.

“In March 2014, a rebel group came to our town of Kassab and told all of us to convert to Islam or leave,” he said. “We all left in the middle of the night in a panic.”

There are more than 12,000 Syrian-Armenian Christians currently living in Lebanon who share a similar story, forced to flee in fear under dark skies. These are urban refugees who share a common experience: as minority Christians, they have suffered persecution for their faith. As such, families such as Kamal’s should be given priority under government-sponsored programs that are bringing 25,000 Syrian refugees to Canada over the coming months.

For his children’s sake, Kamal desperately hopes to be able to take his young family to Canada or Europe, but anywhere that is safe will do.

As Canada begins to receive 25,000 government-sponsored Syrian refugees and as many as 10,000 who are privately sponsored, there is no peace in sight in the Middle East. The self-described Islamic State appears to be as strong as it was a year ago despite heavy bombing by several Western states, including Canada. But the reality is that defeating ISIS will only matter if there is a genuine political will to build lasting peace in Iraq and Syria.

It is good policy as well as a wonderful humanitarian gesture for Canada to welcome Syrian refugees, but the lack of peace and increasing political unrest means there will be even more refugees and more Christians knocking on the doors of the international community in 2016 and beyond.

The War in Ukraine: A Call to Prayer, Fasting, and Action