A festive mood charged this weekend as Archbishop Moussa El-Hage was received as the new Maronite patriarchal exarch in Jerusalem. Archbishop El-Hage replaced Archbishop Paul Sayyah, who assumed the duties of patriarchal vicar general in June 2011. The Patriarchal Exarchate in Jerusalem serves the Maronite community in Israel, Palestine and Jordan.

A number of heads of churches in Jerusalem, representatives of religious congregations and civic leaders lined up along with the small Maronite community at Jaffa Gate — the main entrance to the Christian Quarter of the Old City — to welcome Archbishop El-Hage and escort him to St. Maron Church. Boy scout troops led the colorful procession, which was followed by a Divine Liturgy of thanksgiving and a reception.

Earlier, a farewell reception took place at the Notre Dame Center for Archbishop Sayyah, who served in Jerusalem for 17 years until His Beatitude Patriarch Bechara requested he return to Lebanon to serve as vicar general. A number of speeches were delivered at the reception highlighting the many contributions Archbishop Sayyah made during his tenure in the Holy Land. Particular focus was given to his work as a member of the Assembly of Catholic Ordinaries in the Holy Land and his continued attempts to foster better relations between the various churches through the Middle East Council of Churches.

As the regional director of CNEWA-Pontifical Mission, I was privileged to attend each of these celebrations — both to extend our thanks to Archbishop Sayyah and welcome Archbishop El-Hage to his new position. 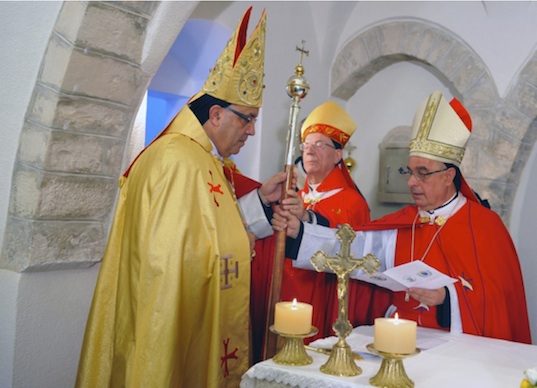