Today was a study in contrasts. After spending some quality time with the dedicated folks who make up the team in CNEWA’s Beirut office, Msgr. Kozar and I accompanied two of our colleagues, Michel Constantin and Norma Rizk, on a visit to the village of Fatka.

The village is perched high atop the coastal mountains of Lebanon’s Keserwan district — an almost entirely Christian area northeast of Beirut that resembles Monte Carlo in its gorgeous terrain, vegetation and ostentatious display of wealth. Fatka, which is a Syriac word, is an ancient settlement now smothered with opulent homes, extravagant hotels and luxury high-rise buildings. Yet not all of its residents are wealthy.

After lifting our jaws off the floor, our car made a few hairpin turns and pulled into a narrow unpaved driveway. Walking by some crumbling walls and impressive Ottoman-style arches, we were greeted by Jihad Lteif, an amiable 43-year-old father of four eager to show us his workshops.

Some 15 years ago, Mr. Lteif established a workshop for the production of candles in the ruins of his grandfather’s house. He began with one locally made machine that produced one size of candles. Using cotton wicks from Lebanon and paraffin imported from Greece, Egypt and China, he quickly established a successful business, distributing his candles to suppliers from his workshop. 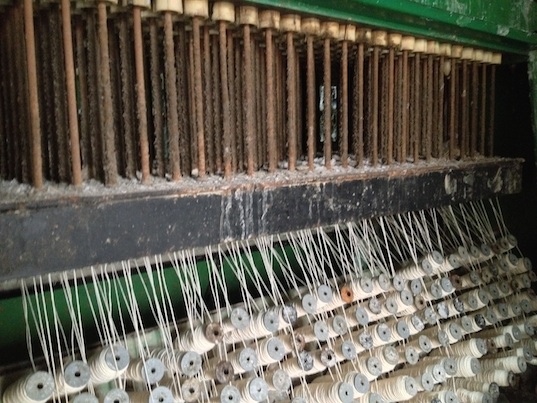 Candles are important in a country where every institution, building and house relies on generators, he said. “Electricity supplied by the municipalities is unreliable.”

A year ago, Mr. Lteif applied for a loan from CNEWA’s microcredit program to help purchase a third machine. This machine he designed to produce devotional candles used throughout Lebanon’s many churches, monasteries and shrines. This effort has enabled him to double his daily production of candles from 1,100 pounds to a metric ton, increasing his income by $500 a month.

Working under images of St. Theresa the Little Flower and St. Charbel, his two workers melted the paraffin, poured it into molds and cooled the candles into shape. Beaming, he took us outside and then into another workshop in which he produces bathroom loofas. Walking through an open door, we entered a large, well-ventilated room — whitewashed — with open windows and spectacular views.

“You and your team have better views than the millionaires who built those houses down there!” Msgr. Kozar pointed out to the proud man.

“My family and I are fighting to stay in our village,” he replied. “I’ve had offers to sell my land, but my family wants to stay here.”

CNEWA’s microcredit program in Lebanon is not a huge government-funded scheme to bolster the nation’s beleaguered economy. Rather, it is a targeted effort that helps people to help themselves, invigorates local economies and encourages families to remain in the lands of their forefathers.

“We have a 99 percent success rate!” said CNEWA’s Norma Rizk, who launched the program in 2003. Ms. Rizk works with each applicant, all of whom are recommended by a parish priest or local religious. She also closely monitors the project, overseeing more than 500 projects in the last decade.

Turning to Jihad Lteif, I congratulated him: “Your grandfather would be proud.”

“We could have left Fatka,” he replied, “but where would we go? Where would I raise my children?

“Here, we are home and free to live our faith.”