It did not take me long upon arriving in the Georgian capital of Tbilisi on Saturday to feel as though I had come upon a different land in a different era, as if I were suddenly transported to J. R. R. Tolkien’s Middle Earth.

Mountains are capped with castles and chapels. Villages huddle close together on the mountainsides. Stone churches, seemingly hewn from the rock, ambitiously rise to the heavens. Church bells summon the faithful. Wood fires and burning brown charcoal permeate the air.

Police sirens, automobiles and celebrating teenagers dressed in the universal uniform of jeans and black sweaters, however, grounded me in the 21st century.

On Sunday, my colleague Thomas Varghese and I attended Mass in the restored 19th-century Catholic cathedral dedicated to the Assumption of the Blessed Virgin Mary. The neo-Gothic church, the statues of the Little Flower and St. Joseph, and the familiar melodies were comforting. Yet the great choir, dominated by a formidable contralto and mezzo-soprano, sang in a language barely penetrable.

We began our journey through Middle Earth in earnest in the ancient Georgian capital of Mtskheta (pronounced “Skayta”).

Set at the confluence of two rivers and surrounded by mountains, this has been Georgia’s spiritual center for some 3,000 years.

High above the town, the sixth-century Jvari Church crowns a mountaintop. An impressive structure, it employs certain architectural techniques contemporary with the great churches of Constantinople and in advance — 500 years or so — of the Romanesque churches of Italy and western Europe. 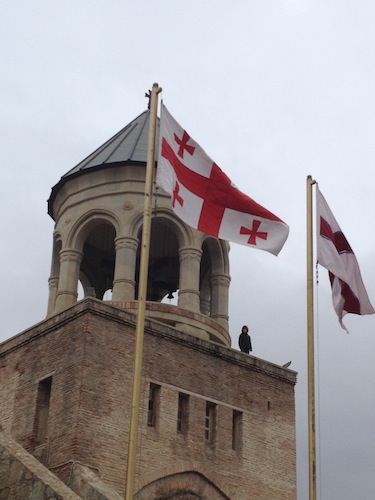 Down below, dominating the town is the Cathedral of the Life-Giving Column. Sounds pagan? Therein lies a legend.

The structure dates to a fourth-century Christian king, Mirian III, who ordered the church to be built over a Zoroastrian temple after heeding the words of a missionary named Nino. Armenian, Byzantine, Georgian, Greek and Latin sources all indicate that, in circa 300, Nino, a woman from Cappadocia, left Jerusalem for the ancient Georgian kingdom of Kartli in search of the robe from Christ’s crucifixion.

“Equal to the apostles,” as Georgians revere her today, St. Nino worked primarily among the kingdom’s Jews, who were her first disciples. Written about a century after her death, “The Life of St. Nino” records the close relationship that existed between Nino and the Jews of Mtskheta (the capital of Kartli), as well as between the churches of Georgia and Jerusalem. It also details the conversion of King Mirian III, his establishment of Christianity as the faith of the kingdom and the erection of the shrine in Mtskheta to house the robe of Christ, known as the Cathedral of Svetitskhoveli, or the “life-giving pillar.”

As we approached the cathedral, bells and bongs in an ominous rhythm deafened us. The sights and sounds here were unlike anything I had experienced.

Entering the cathedral, which was rebuilt in the 11th century — surviving even the onslaught of the murderous Timur the Lame 300 years later — we were caught up in a whirl of activity; priests were baptizing infants, children and even adults in the baptistery, near a medieval replica of the Holy Sepulchre in Jerusalem, while others celebrated weddings before the greenish iconostasis.

Dressed in fashionable white gowns and veiled as required in the Orthodox Christian tradition, the brides seemed pale holding the marriage candles. Their grooms, dressed simply in black, held the arms of their brides as they processed three times in front of the iconostasis, wearing Georgian-style marriage crowns adorned with seed pearls and gems. To a couple — there were four — they looked like prince and princesses on their wedding day: regal, erect, solemn.

As we stood there, marveling at the liturgies, the ancient space, the crowds, the frescoes and icons, I thought back to the musings of my Georgian host, Liana, after we had consumed a liter and a half of wine at dinner Saturday night.

“We Georgians are day dreamers, aristocrats,” she said, laughing. “We feast, laugh, celebrate living, and the next day, we are depressed, wondering how we will pay for it. It does not occur to us to work hard, like the Armenians.”

Monday, Thomas and I spent the day meeting various church leaders — Armenian and Roman Catholic as well as the Vatican ambassador — and Caritas, with whom we have partnered for years.

“We are here to listen and learn,” I explained. We heard a lot.

The churches here are doing wonderful things: Caring for the elderly who have been abandoned; working with street children and protecting them from trafficking; providing assistance to impoverished families; resettling internally displaced families. The list goes on and on.

These efforts are being done with almost no money, in an impoverished country, with little assistance from the outside world. The assistance is given to all regardless of belief or unbelief; “need does not discriminate,” we heard in many forms, time and time again.

Yes, there are challenges. But what unites those behind these efforts is the commitment to serve as commanded by the Gospel so “that all may be one.”