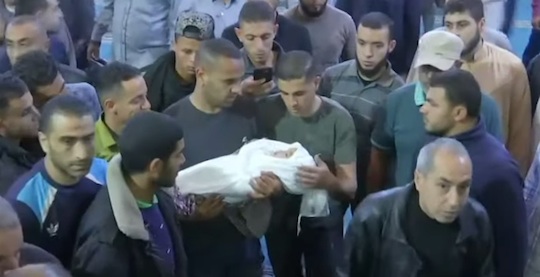 Palestinian men grieve over the body of a little girl they say was killed by a drone strike over the weekend. (image: YouTube/CBS News)

A fragile truce is taking hold in Gaza after days of relentless shelling and cross-border fighting that killed at least 22 and, according to one account, claimed the life of a little girl who was playing outdoors.

CNEWA’s regional director in Jerusalem, Joseph Hazboun, sent us an email this morning:

The cease-fire announced early morning today is holding. None of the parties is interested in escalations. Ramadan started today and Independence Day is on Thursday.

Let’s hope this truce will endure.

We pray for all those who are victims of this violence — and pray this peace will hold.

The video below from CBS News has the latest, as of Monday afternoon:

A fragile cease-fire is taking hold between Gaza and Israel after days of cross-border fighting.
(video: CBS News/YouTube)