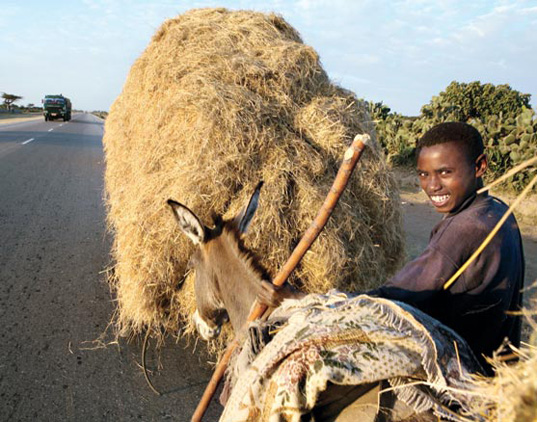 In 2010, we reported on the plight of farmers in Ethiopia:

For Lema Waka and his family, life in their hamlet in Ethiopia’s Rift Valley carries on much as it has for generations. On this blazing hot day, the family is wrapping up the season’s teff harvest. With the help of laborers, they have cut, threshed and sacked the grain that Ethiopians use for the baking of their bread, injera. Together, they load and strap the sacks onto donkey-drawn carts. Harnessed up, the Lemas’ caravan is ready for the market in Meki, the nearest town some eight miles away.

Mr. Lema cracks the whip on the donkeys and the caravan pulls onto the paved and freshly painted Trans-African Highway 4, the only visible sign of contemporary life for miles. Once completed, Highway 4 will traverse the entire continent, linking Cairo to Cape Town. Intended to stimulate trade, investment and growth across the continent, it has done just that for some Ethiopians, proving to be a vital lifeline between urban centers within the country.

But the benefits of Highway 4 have not been reaped by most of Ethiopia’s rural population, even those along its route. Most of Ethiopia’s farmers use age-old agricultural methods to plant traditional crops, such as teff, onions and tomatoes, which sell cheaply in local markets. Most rely on the fickle goodwill of Mother Nature. Most expect their children, especially their daughters, to help maintain the family farm and manage the household at the expense of continuing their education. And most consider the donkey-drawn cart the industry standard. For these peasant farmers and their families, survival is a hand-to-mouth equation for which there is no margin for error.

The Lema family is no different. Lema Waka depends on the rains and his five-acre plot of land to support his wife and nine children. He grows corn, white beans, sorghum and tomatoes, but mainly teff — the most labor-intensive crop of the bunch. Though the grain covers the greatest amount of cultivated land in Ethiopia, it delivers the lowest crop yield per acre. Mr. Lema’s 1.5 tons of teff might bring in a little more than $1,000 on the market. But much of it never reaches the market at all. With it, he must first pay the day laborers, who helped with the harvest, and neighbors, who lend him cattle, and he must purchase seeds for next season. The Lemas will be lucky to clear $500, barely enough to feed the family until the next harvest.

Read about some solutions aimed at helping these farmers in Farming a Brighter Future from the January 2010 issue of ONE.

And to learn how you can help them today, visit our @VVVV-1