Plants need water; it’s a fundamental truth, an observation stretching back to the earliest days of human civilization. Nowadays, however, we often see its converse: a case of water needing plants. Water purification is critical to human infrastructure, and effective sewage treatment plants are, in many regions, virtually necessary to sustain a settlement – urban or rural.

As part of its mission to improve human welfare, CNEWA is actively involved in the construction of treatment plants in underserved regions. Engineer Imad Abou Jaoude, of CNEWA’s Beirut office, recently visited one such plant in Lebanon, and had this to say:

On Wednesday, 27 July 2011, we took a group of students from the Environmental Health Department, part of the Faculty of Health Sciences at the American University of Beirut, to one of the environmental projects (the Maaser el Shouf Plant) that CNEWA executed in the Upper Shouf region five years ago through funding from USAID. The Maaser el Shouf Plant is one of the seven plants that were constructed in the Upper Shouf Region to serve 12 villages with a total population of 24,200 persons. These projects are considered vital, especially in the rural areas where the government doesn’t yet have any national plan regarding the treatment of wastewater. CNEWA’s intervention in this domain occurred after receiving requests from the inhabitants of many regions who are suffering from the pollution of their underground water and springs that form the main source of irrigation water, and in some cases even potable water.

It is worth mentioning that AUB is using our projects as exemplars, to demonstrate to their students both the newest techniques applied in this domain and the fruits of a successfully executed sewage plant project.

The students and their professor were impressed by the system used and by the quality of effluent produced, especially after they compared it to other similar projects they have visited. Our system is a user-friendly system that is easily operated and utilizes low energy while maintaining maximum efficiency. A well-trained team of local technicians is responsible for the plants’ operation, under the supervision of two engineers. To ensure the sustainability of these projects, we undertook two operations, both successful: first, launching intensive training and awareness campaigns that accompanied the project execution; second, fostering an agreement between the Union of Municipalities and the Water Committee in the region, giving this committee (which is considered professional) the responsibility to maintain these plants.

From the outset, the goal was to improve health and welfare in the Upper Shouf region. However, if a side effect is that we’ve given further resources to educators, so much the better! 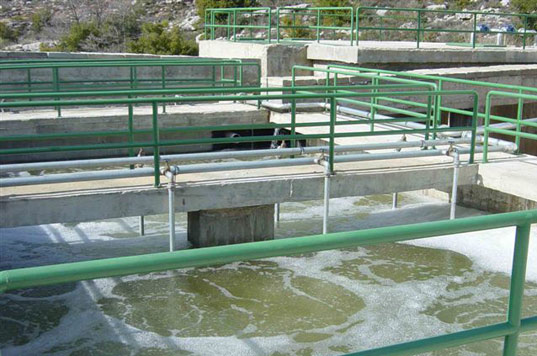