An old friend dropped by the office today: Sister Eliseea Papacioc, a Romanian Orthodox nun and world-renowned iconographer. She’s visiting the United States for a few weeks, stopping in Washington, New York, Florida and Tennessee for exhibitions and talks about her work, and she came to say hello and show us some of her remarkable work.

Last year, we took readers to her Romanian studio, and she explained the prayerful process by which she creates her icons:

“Once I understood that these icons should only be made with never-ending prayer, I realized I could not write them, because I could not pray. And I was a nun,” she admits.

“Your prayer becomes the icon, and the icon becomes prayer again for the one who has it in his home and prays in front of it. It’s all mystery, a real and continuous link to God,” she explains, as she sits in her workroom’s red armchair and sips a cup of tea.

Now, when Sister Eliseea writes, she prays nonstop. She follows a simple daily routine, which begins and ends in prayer. Each morning, she wakes up at dawn and reads from the Psalms. “That’s where I get all my sap, all my spirit,” she says.

Afterward, she writes icons, which she does until the sunset. She often continues into the night, sometimes until as late as 2 or 3 a.m. However, she only uses colored paints in the daylight.

She spent some time today explaining more of the spirituality that informs her work.

“I’m very connected with God when I do this,” she said, “and God is doing everything through my hand. I can’t paint without prayer. This comes from heaven, from the words of God, and if you can’t pray you can’t call yourself an iconographer. The prayer comes in your heart from God. Through this prayer, God gives me this inspiration. It’s like I’m under his protection all the time when I paint, he’s covering me with his wings. I never know how a painting is going to be. I just start a sketch and it just comes to me.”

Sister Eliseea said she’s written hundreds of icons over the course of her life; some can be done in a matter of months, others take years. A large icon of the “Deposition from the Cross” — Jesus being taken from the cross — took three years. It is all a labor of love.

“I’m not a commercial painter,” she said with a shy smile, explaining that she doesn’t keep any of the icons for herself. “I just paint as much as God inspires me. God gives me this gift to give to people, to give away.”

You can see Sister Eliseea presenting a couple of her icons, below — the aforementioned depiction of the Descent from the Cross on the left, and another portraying the Annunciation on the right. Read more about her in A Romanian Renaissance from the January 2012 issue of ONE. 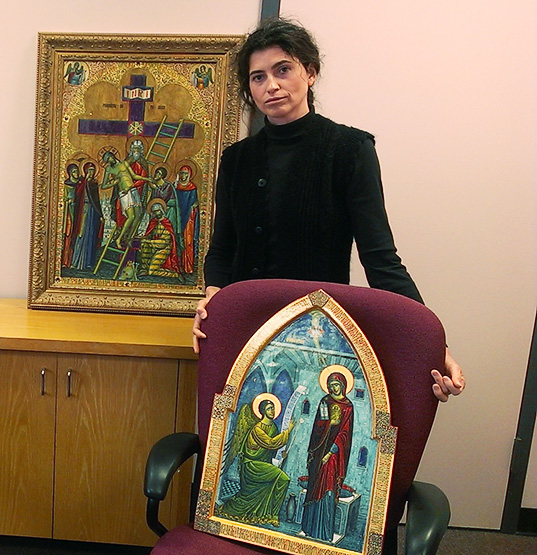