Over the years, George and his wife Marie, who died in 2008, have given selflessly to many causes near and dear to their hearts. They have been especially good to Catholic concerns for alleviating poverty, strengthening higher education and supporting family life. In addition, George, Marie and their children have selflessly and generously supported CNEWA’s mission with time, energy and financial resources.

Born on 15 February 1918, George earned his bachelor’s degree from New York’s Fordham College in Rose Hill in 1938 and later served as a chair of Fordham’s Board of Trustees. A former managing partner of Goldman Sachs, he was active in the Equestrian Order of the Holy Sepulchre of Jerusalem, serving as lieutenant for the Eastern Lieutenancy from 1991 to 1992.

George Doty played an active role in many agency works, including full support for the rehabilitation and decoration of the Great Dome of the Church of the Holy Sepulchre in Jerusalem. This historic project brought together the church’s three custodians — Greek Orthodox, Armenian Apostolic and Franciscan, communities that had often been at odds with one another — ending a centuries-old standoff that could have resulted in the collapse of the ancient shrine.

“For decades, visitors to this holiest of Christian shrines … have left disappointed, even repelled. Expecting a shrine that related to their spiritual or aesthetic understanding of the Paschal Mystery — the passion, death and resurrection of Jesus Christ — the pilgrims instead entered a dark, cavernous space containing a number of chapels, each used exclusively by one of the Christian communities,” wrote Bishop Denis Madden of Baltimore (then CNEWA’s associate secretary general) about the restoration project and its dedication.

“For 68 years, the dome had been concealed from public view. With mouths open, heads tilted back, and audible signs of delight, all looked up to the heavens, to the brilliant light that represents the glory of the Lord.”

Frequent visitors to the Holy Land, George and Marie were concerned for the churches and communities there. On a visit more than 15 years ago, Marie quietly observed to her husband that “the children have no place to play.”

Determined to fix that, the couple provided CNEWA with the funds to build and equip playgrounds and related facilities in Ramallah, Bethlehem and Gaza. In addition to swings and slides, handball and basketball courts, the parks feature fountains and green lawns, luxuries Palestinian children once associated with settlements.

George and his wife also subsidized the work of Bethlehem University, the only Catholic institution in the Holy Land, supported CNEWA’s housing renovation program in the Old City and invested in the agency’s labor intensive program in the West Bank, which put thousands of the unemployed back to work while bolstering Christian institutions.

Motivated by his Catholic faith, George leaves us with a legacy of what faith in action can do for the people of God. He also leaves behind a loving family; George and Marie’s son, Bill (old/broken link: https://cnewa.org/default.aspx?ID=1458&pagetypeID=6&sitecode=SSSS&pageno=1), has been particularly helpful to the CNEWA family, managing its financial instruments and giving so much of his time, talent and resources.

You can read more about his remarkable life at this link.

May God reward George Doty for his generosity and loving concern. May his memory be eternal. 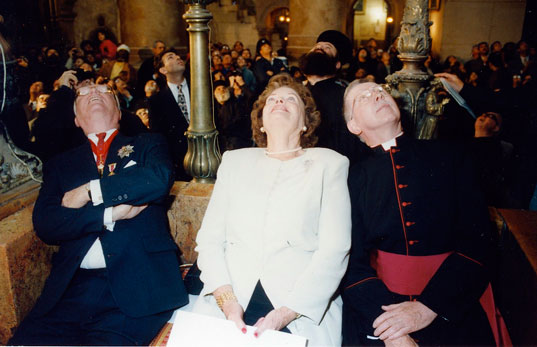