Yesterday, veteran journalist Diane Handal described for us her return to Beirut after five years. She visited the city recently to report on CNEWA’s work with innovative microcredit program – a program she details in the September issue of ONE magazine. Today, she writes of her travels to a town north of Beirut called Amchit, where she met a remarkable man who was one beneficiary of the microcredit program. 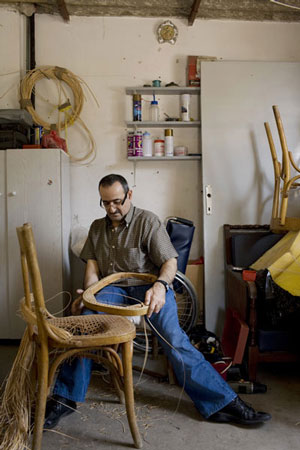 His name is Anis. He is 48 years old, the father of two children.

One some days, he works three jobs. During the day, he is a supervisor in a mattress factory; nights and weekends, he works caning furniture in a tiny shop next to his home. On some nights, he fills in as a disc jockey.

Anis is driven, not just to make a living for his family, but also to give his son and daughter the private school education he never had. Public schools, I am told, are not an option in Lebanon.

Anis had polio when he was just a year old. Because of the polio, Anis was 12 years old when he started school. In fourth grade, the teacher told him he didn’t belong in her classroom but should be in a special school for the handicapped.

At the time, Anis was at the top of his class and exempt from taking exams. He told me he dreamed about becoming a professor. Those dreams were shattered.

Today, his right arm and left leg are both paralyzed. His left foot is twisted to the side and yet he struggles to walk on crutches, not giving in to the wheelchair that sits behind him.

I was in awe of this man. He had an incredibly optimistic attitude about life; he had goals and he was definitely not complaining. He was focused on his work; caning in his tiny shop that neighbors helped to build was what he loved.

Anis had dreams too, of expanding his workshop one day, buying more tools, and “hiring other handicapped people like me,” he said.

He perseveres despite a recent operation to remove his spleen and yet another to fix the crooked fingers in his left hand, the only good one he has.

I think about my own life and how much I have and how often I forget.

That afternoon, returning to the city, I pass the Four Seasons Hotel, built by Prince Al-Waleed bin Tala, the Saudi businessman. It stands across from multimillion-dollar boats in the harbor.

I hear from friends that business at the hotel is slow. I think it is perhaps because of the “Arab Spring,” the revolutions sweeping across the region, touching so many of Lebanon’s neighbors. But they say not even the Gulf customers are coming.

The former Holiday Inn, a massive gray building, backing up against the Phoenicia InterContinental Hotel is still standing but riddled with huge holes, which have turned to orange rust. Green plants sprout through the balconies and what once were windows.

It sits as a testament to the bitter memories and dark shadows of Lebanon’s civil war that began in 1975 and lasted 15 years.

I stop and look up at this building and its scars of war and my mind wanders back to Anis. He too stands firm, refusing to give in to the dark shadows and bitter memories of his past, fighting every single step of the way for survival with grace and with courage.

Read more about Anis and his work here.

Oldest Christian Hospital at the brink of Closure in Lebanon