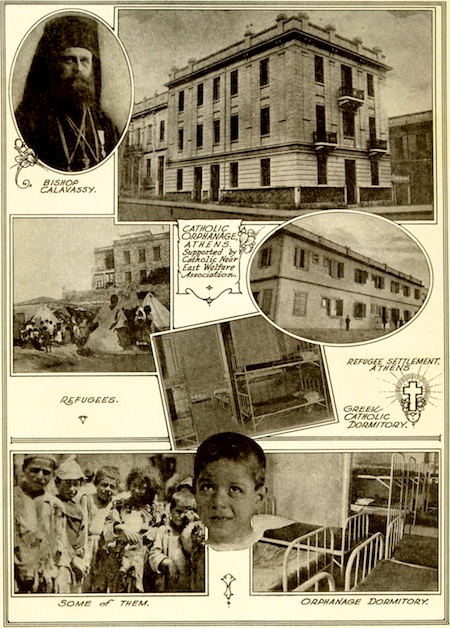 When Bishop John Gavin Nolan, former secretary general of CNEWA, documented the origins of the association, he began Chapter I with the following words:

On 10 April 1917, four days after the United States entered World War I, Father George Calavassy, a bearded, 36-year-old Greek Catholic priest from Constantinople, dropped an envelope in the mail. Its contents, three pages painstakingly handwritten in English on plain paper at the Jesuit college of St. Francis Xavier in New York City, were addressed to James Cardinal Gibbons in Baltimore, the dean of the American hierarchy. After reviewing the origin and purposes of the tiny Greek Catholic Exarchate (diocese) that the Holy See had established in Constantinople in 1911, Father Calavassy reminded the cardinal of his promise, made in Baltimore two months earlier, to present to the American bishops at their next meeting the needs of the exarchate — viz., $500,000 for a seminary, two schools and a “large” church, presumably a cathedral.

For 25 years, Cardinal Gibbons had lent his name to American Protestants to raise funds for the Armenians in Turkey, but it seems that he did not give Father Calavassy’s letter so much as the favor of a reply. The letter is important, however; it explains clearly in Father Calavassy’s own words the Holy See’s attitude and strategy vis-a-vis the Orthodox before Vatican Council II made ecumenism a household word. Further, it was due to the contacts Father Calavassy made with Catholics in America during the war, and to the correspondence he maintained with them afterward, that the Catholic Near East Welfare Association was founded in Philadelphia in 1924.

Indeed, though the work of CNEWA’s founding would involve such colorful characters as the Rev. Paul Wattson, S.A.; Msgr. Richard Barry-Doyle; the Rev. Edmund A. Walsh, S.J.; and ultimately Pope Pius XI, George Calavassy’s efforts to support his flock served as the spark that set the work in motion.

Born to Catholic parents in 1881 at Ano-Siros, on the Cyclades island of Siros — “the island of the pope,” in the words of Jesuit and Capuchin missionaries — Calavassy joined the priesthood early in life, building a reputation as an apologist for Catholicism and strong advocate for ecumenism, long before the latter had come into its own as a modern movement.

Above all, he went to every imaginable length to secure the safety and continuity of his community. In his profile on Greece’s Eastern Catholic Church, Michael La Civita wrote:

If not for the humanitarian and pastoral works of one of its leaders, Bishop George Calavassy (1920-57), this church would barely merit a footnote in the annals of church history. ?

In 1911, Pope Pius X erected an ordinariate, later an exarchate, for this nascent church and named Father Isaias Papadopoulos as its first bishop. Called to Rome during the waning days of World War I, he was succeeded in 1920 by Bishop George Calavassy, who witnessed firsthand the horrors of a country at war with outsiders and with its own Christian minorities.

By 1920, an estimated million refugees had swarmed Constantinople. Hundreds of thousands of them were Greeks. Fleeing the excesses of the Bolsheviks, some 100,000 penniless Russians engulfed the former Byzantine capital. Scores of Armenians, Assyrians and Chaldeans fled their homesteads during and after the war; many more died in the struggle to defend them.

Among the first to minister to the needs of the dispossessed was Bishop George. Overwhelmed by the refugee crisis — especially after his requests for funding in Europe and the United States went unanswered — the bishop appealed to Father Paul Wattson.

The resulting efforts would prove a lifeline to his church in its most difficult time — sustaining orphans, students, parishioners and seminarians alike, and supporting the small church’s monumental relief efforts. And the rest, as they say, is history.

To continue the work that began with Bishop George Calavassy’s appeal for help, click here.

Home Is Where the Heart Is