In many reports and blogs on Gaza, the tone is often negative, reflecting the very difficult circumstances in Gaza — for instance, the gas shortage or the usual challenges associated with the blockade. But this time, I want to write about a very joyous celebration: the 12th commencement ceremony at the Holy Family School in Gaza. I was privileged to attend this along with his Beatitude Patriarch Fouad Twal.

This was no ordinary ceremony, as the 17 graduates — including three Christians — started their schooling in 2000, just as the second intifada was beginning. There has not been a stretch of quiet since they started their studies; they’ve had to contend with closures, travel restrictions, a blockade, a full-fledged war, violence and counter-violence, and swift and forceful Israeli air strikes. In short, these young men and women have not had a normal childhood or education. Yet, sitting there for the celebration, I couldn’t help but marvel: it was a grand, festive event with speeches full of hope and big dreams, just like any other commencement ceremony anywhere else in the world. Despite the bleak political situation, the valedictorian was full of energy and hope that tomorrow will be a better day.

Between each speech, there was a performance by the school’s Dabkeh team, featuring traditional Palestinian dance. It was the largest I have ever seen, with some 50 members of all ages. The team was fully synchronized and disciplined. It was a great joy to watch. These students were proud to be performing for us all — as if they were passing on a message that, despite all the difficulties of these past 12 years, they learned how to have fun and how to keep the culture alive.

Congratulations to the class of 2012! May the future be kinder to you than the past. 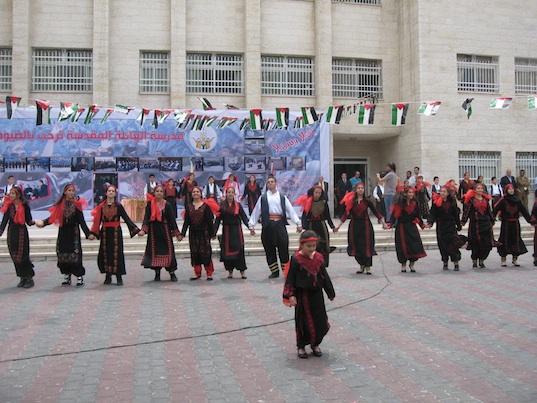