Last week, we received some sad news: Longtime CNEWA friend and benefactor Alfred A. Lagan passed away on 23 July. He was 77. Norma Intriago, a major gifts officer in our development office, recalls Al’s life and legacy.

I remember the first time I met Al. I was giving him an update on the Paul VI Ephpheta Institute, which he had supported with a large gift. I knew he was a successful businessman in charge of managing investment portfolios, and I felt a little intimidated. I thought I had to put on my business hat and talk about budgets, return on investment and that kind of thing. But he stopped me and said: “Okay, thank you for that piece of information. But I just want to have a conversation.” More than anything he wanted to hear how the children were doing and what the sisters needed.

Al was very close to Ephpheta. It really struck a chord with him, and he gave significantly to support the education of hearing-impaired children in Bethlehem. He also supported the education of seminarians and novice sisters. Catholic education was important to him.

Catholic education, to him, was the best way to tackle the issue of poverty — to give someone the opportunity of education, to arm them with knowledge and good values so that they can build a better life. I think Al felt very blessed as someone who had gone to college, got a master’s degree and started his own investment firm. He felt like his success wasn’t his to keep. It didn’t belong to him — it was God’s blessing. So it was his turn to share that opportunity with others. He was a true altruist. He really, truly, selflessly rendered of himself to others in need.

I visited Ethiopia with Al to see Catholic institutions associated with CNEWA, especially child care institutions and schools. Al went because he had invested a lot in schools in Ethiopia, and had done so for more than 30 years. He also wanted to introduce one of his daughters to the work of CNEWA. He wanted to share that with his family. 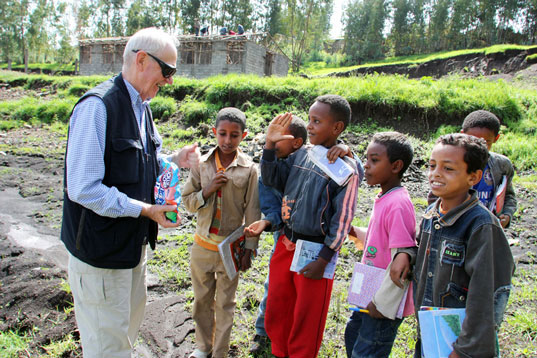 The trip was a rough one. At one point, we were staying in pretty poor accommodations. The electricity went out. We went a couple of days without showering. You can imagine how that affects your mood. But Al’s mood never changed! Whether he was starved, unwashed, whatever, he just shrugged his shoulders. Because he knew the trip wasn’t about his comfort. It was about something bigger than him. It was about the children and their eager faces. It was about the sisters who ran the institutions and their resourcefulness. That was what the trip was about. These kids had nothing, and it was about making sure they have a chance. I think Al taught me quite a lot about living the Gospel.

I believe that Al’s legacy will continue. When you have one of these really exceptional forces in your life, I don’t think that goes away. I see it in his daughters. They are also friends and supporters of CNEWA and other Catholic organizations. Al led by example. I see it in his children, and I’m sure in his grandchildren. His legacy will live on.