Laura Tarazi works in the Jerusalem office of the Pontifical Mission, CNEWA’s operating agency in the Middle East.

On 30 May 2012, the Jerusalem staff of the Pontifical Mission invited Archbishop Antonio Franco, apostolic nuncio in Israel and apostolic delegate in Jerusalem and Palestine, to an informal gathering at the Mission’s Jerusalem office. Bidding farewell to his excellency as he prepares for retirement, Sami El-Yousef, CNEWA’s regional director for Palestine and Israel, thanked him for years of cooperation and support for the Pontifical Mission and its work in the Holy Land.

The regional director highlighted several of the projects currently underway, including youth programs, job training initiatives and support for church institutions throughout Israel and the occupied Palestinian territories. He also thanked the archbishop for his continuous support for the work of the Pontifical Mission Library and the Ephpheta Institute in Bethlehem, as well as the Near East Council of Churches’ (N.E.C.C.) Mother and Child clinics in the Gaza Strip.

Archbishop Franco, in turn, expressed his sincere gratitude for the the Pontifical Mission’s institutional solidarity with the apostolic delegate and for its historical presence and dedication to the church and its communities of the Holy Land. 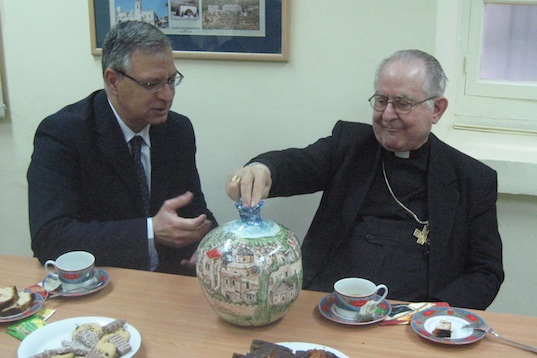