Veteran journalist Diane Handal returned to Lebanon recently to report on CNEWA’s work with an innovative microcredit program, which is offering assistance to some of the neediest people in the country. You can read her account in the September issue of ONE. She also sent us these impressions of what it’s like to be revisiting Beirut. 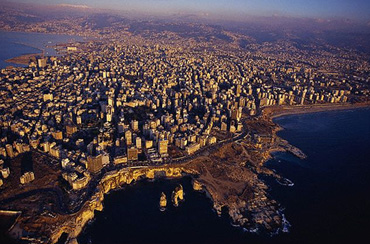 After five years, I have returned to Beirut. While there are many more cranes rising in the downtown area, not much else seems changed.

I am here to meet with several beneficiaries of CNEWA-Pontifical Mission’s microcredit program in Lebanon and hear their stories.

The streets are still a mass of broken cement and one has to look down so as not to break a leg. The sidewalks are high and sometimes disappear without notice.

Lebanon is one of the few countries left in the Middle East that is not in the midst of a revolution. Nevertheless, it bears scars from many wars, particularly the civil war that lasted 15 years. What’s more, I am told that the situation between the Sunnis and Shiites is heating up once again.

The weather is hot and humid; the sea is blue; and, despite the absence of a government, Beirut carries on.

I walk along the Corniche and a pale pink line dots the horizon as the sun slips into the sea.

The Lebanese are power walking, passing stately palm trees on their left.

Fishermen line up by the Mediterranean; their eight-foot poles rest on the metal railing. They smoke and chat with one another, waiting.

Men and boys in bathing suits are swimming in the polluted water below and lie on the jagged rocks sunning themselves.

I shudder when I see a Starbucks across the street below the American University of Beirut (AUB) campus, where my favorite Lebanese sweet shop once stood. The BMWs, Range Rovers, and Mercedes are parked in front, their owners sipping mocha lattes and espresso checking their blackberries or talking on their cells. I might as well be in L.A. or New York!

The Corniche is awash with young parents and their little children. Two teenage boys – car doors open, bass-heavy music blaring – are checking out the girls. Cars whiz by and the obsessive horn honking never ends. Chic women in their designer sunglasses and workout clothes pass those from the Gulf, covered in the black abbey, niqaab (face veil) included.

A few blocks away, I hear the call to prayer coming from the minaret next to the mosque. The chanting mixes with the soothing sound of the waves breaking against the rocks.

A boy on roller blades speeds past the walkers; a toddler on a bicycle does a semi-circle twist and almost crashes into me. A mother kisses her curly black-haired baby and cuddles her in her arms.

A young boy rides toward me on a bicycle selling sesame bread that looks like a Frisbee with a hole. A grandfather passes me sharing the flat bread with his grandson.

Further down, a merchant is selling charcoal roasted corn on the cob and people crowd. Some noisy motorboats roar across the choppy sea in the distance.

The next morning, I travel north to a town called Amchit, about two kilometers (1.2 miles) north of the ancient city of Byblos. It was there that I met a truly extraordinary man.