Christmas Eve in the Holy Land began with a visit to the Latin Patriarchate of Jerusalem. Archbishop Fouad Twal, Latin Patriarch of Jerusalem, and Msgr. William Shomali, the patriarch’s auxiliary bishop, hosted a brief reception, which included Father Guido, several chancery officials and myself.

During the reception, Patriarch Fouad politely warned me: “There will be many more such receptions today, so pace yourself on Arabic coffee and sweets.” It was good advice, as I had already experienced the remarkable hospitality of the Holy Land’s residents over the past three weeks. Everyone serves coffee or liqueur with chocolates or cookies.

Patriarch Fouad then treated us (about eight in total) to a lovely lunch, during which we engaged in pleasant conversation. Afterward, we headed to a reception hall, where the patriarch greeted about 150 parishioners and a huge contingent from the press corps. On behalf of all present, the parish elder formally greeted Patriarch Fouad. I had the honor of standing beside the patriarch, personally greeting each member of the delegation.

After this event, it was time to get the “procession” in order for Bethlehem. Procession, here, means about 50 cars in Jerusalem and another 100 cars, chauffeuring local dignitaries and elders, which joined the cortege along the route to Bethlehem. I had the privilege to ride in the second car, immediately behind the one driving Patriarch Fouad.

Military and police vehicles escorted the procession, which departed from Jerusalem’s Old City. The traffic in Jerusalem was blocked at all intersections, allowing us to crawl toward the city’s limits. I say “crawl” because there were so many cars in the motorcade that it moved very slowly.

On the way to Bethlehem, we made several stops, where Patriarch Fouad greeted elders and parishioners. Again, I was honored to greet them alongside the patriarch.

Once inside the city of Bethlehem, more cars joined the procession. As we arrived in the city’s center, we had to stop many times to allow the thousands of boy and girl scouts with colorful flags and band instruments to enter and lead the procession.

Bethlehem’s streets were jammed with people — Christians and Muslims alike — who came out to watch the procession and celebrate Christmas. Local authorities estimated that more than 100,000 people came to Bethlehem for the holiday.

The mood among the crowd was very warm and welcoming. People smiled and waved at us as we passed them in our cars; some asked for our blessings. The patriarch was a popular attraction and he often opened his window to invite people to come closer for a photo or a warm handshake.

The crowd was very mixed: Bethlehem residents and pilgrims from all over the world; elderly and hordes of young people; shoppers and merchants. One sight that caught my eye: Four young men in their twenties, locals I presume, sat in front of a little cafe, smoking a hookah pipe. As our motorcade passed, two of them made a reverent Sign of the Cross with the pipe’s mouthpieces.

We finally arrived in Manger Square at about 3 p.m. (about one and a half hours late), where tens of thousands of people and hundreds of members of the media gathered. Everyone surged to greet the patriarch and his entourage. The police and clergy in charge did their best to open a small lane for us to enter the Basilica of the Nativity.

Inside the basilica, leaders from the other local Catholic and Orthodox churches as well as members of the Muslim community greeted the patriarch.

I must tell you: the local hierarchy had me all dressed up as an honorary canon of the patriarchate. I had on my monsignor’s cassock and sash, over which I was asked to put on a very finely woven surplice with red sleeves and much lace. As the coup de grace, I wore a rabbit fur shoulder cape and an accompanying purple sash and hood. Never having worn such an outfit, I needed Msgr. Shomali’s help to vest properly.

About an hour later, we participated in a ritual, which included a brief visit to the grottos underneath the main basilica. I cautiously hunched over to enter the steep, low-ceilinged entry of the crypt and visit its four ancient altars and the altar in the new church overseen by the Franciscans.

This was a very special moment for me. I was so overwhelmed by this visit to these most holy altars and spaces that, when I returned to New York, I retraced my steps with the help of some guidebooks to appreciate more fully their significance.

However, I was most touched by the famous “star,” which is embedded in the stone to designate the place where Jesus was born. How does one describe that moment? Not with words, to be sure. And the stone niche, where Jesus was laid in a manger? For a believer, it doesn’t get any better than this.

Later, Bethlehem’s Franciscan community hosted a reception and dinner. Many dignitaries attended the event, including President of the Palestinian National Authority Mahmoud Abbas, to whom the patriarch personally introduced me. Patriarch Fouad also introduced me to Jordanian Foreign Minister Nasser Judeh. It was a very warm and welcoming gathering, typical of events hosted by the Franciscans.

Midnight Mass actually began at 11 p.m. with matins, the traditional early morning prayer of the church. The celebration continued with the Solemn Eucharistic Liturgy, led by the patriarch and concelebrated by seven other bishops — Latin and Eastern — along with several hundred priests. Most of the priests were foreigners, who had traveled to Bethlehem to celebrate Christmas as a part of a once-in-a-lifetime pilgrimage.

The liturgy was beautiful and the basilica was packed. Television crews from all over the world filmed the Mass. The Palestinian Authority televised it live, to feeds around the world, which I believe was a first.

I am very happy to tell you that Father Guido and I remembered all of you in our Mass intentions, especially those who sent their intentions to our office beforehand. Thanks to Bernadette Wallace, my administrative assistant, we received and brought with us all of these names and intentions.

The Mass ended about 2:15 a.m. and we retired to the adjacent Franciscan monastery for a few winks of sleep.

Early Christmas morning, Father Guido and I visited the place of our Lord’s birth, which was a very special, silent moment for me to reflect on the significance of where I was standing.

Soon after, we attended a morning Mass in Arabic — celebrated by Patriarch Fouad — along with local parishioner and many pilgrims. Again, numerous members of the media were present and the basilica was filled to capacity. People even stood outside in the rain. The Mass in Arabic was most glorious and the music, most energetic.

Afterward, I had the opportunity to meet and greet the many pilgrims and foreign workers in Bethlehem, who gathered at this cherished site to celebrate their own special Christmas. Many Sri Lankans, Indians and Filipinos asked me to have their photos taken with yours truly — in my monsignor’s cassock and red sash. They were all so happy, and delighted to know that I have visited all of their countries in my previous work with the Society for the Propagation of the Faith.

My visit to Bethlehem ended around noon and we returned to Jerusalem for the remainder of the day.

Shortly after midnight, Tony Za’rour, our Jerusalem office’s driver and general services associate, drove Father Guido and me to the Ben Gurion International Airport in Tel Aviv. We said our goodbyes and caught our flight back to New York.

Rather than add additional comments about the grandeur, splendor and overwhelming excitement of this series of pastoral visits and pilgrimages, I will let my previous reports to you say it better, each as they unraveled in rapid succession.

I am grateful to CNEWA’s Communications Department, for reviewing and editing my posts, videos and photographs and helping me share my adventures with all of you.

Thank you for joining me on my journey to the Holy Land. The CNEWA-Pontifical Mission family is truly ONE. God bless all of you and God bless the poor of the Middle East and Holy Land whom we serve. 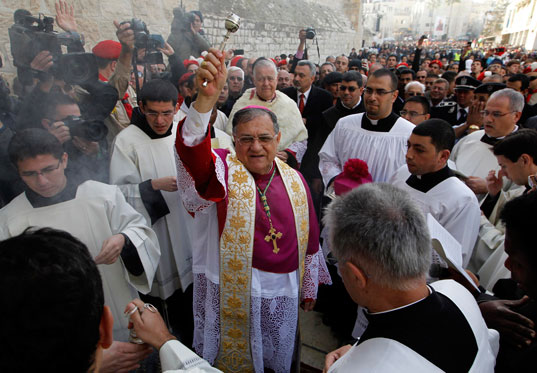 Little Prince Centers in Armenia Care for the Vulnerable

‘Even Love Has a Wall Around It Here’

To the East by Winding Paths