A few days ago, the Paul VI Ephpheta Institute celebrated its 40th anniversary with a Mass in the institute’s chapel. The Latin patriarch of Jerusalem, Archbishop Fouad Twal, presided, assisted by the apostolic delegate, Archbishop Antonio Franco, and over a dozen priests. Some 250 guests were in attendance, including the mayor of Bethlehem, Dr. Victor Batarseh. CNEWA-Pontifical Mission has a long history in support of the institute, so I was proud to be there along with some of my colleagues to help mark this joyous occasion.

For those not familiar with this wonderful institution in the little town of Bethlehem, Ephpheta was created in response to the plea of Pope Paul VI during his historic 1964 visit to the Holy Land. He recognized the need for church institutions to be set up in education, health care and social services to serve the local Palestinian population. He encouraged the Sisters of St. Dorothy to establish a school to educate hearing impaired children. Six years later, in June 1971, Ephpheta began and admitted its first class of students later that year. The pope also asked the Pontifical Mission to assume a leadership role in ensuring the financial stability of the newly opened institution. Pontifical Mission has since faithfully supported the school financially through an annual subsidy to cover the operating costs. Today, Ephpheta serves 150 students, offering a first-class education and support to about 150 children through the 10th grade.

With the wonderful support of its donors, Pontifical Mission not only provides financial support but, through its board, provides support in whatever area that is needed, whether in financial management, administration, fundraising initiatives, relations with the public sector or what-have-you. The partnership that has developed between the Sisters of St. Dorothy and the Pontifical Mission is exemplary.

The school is now embarking on a major project to expand to the 12th grade. This will give students the opportunity to earn a high school diploma at the same school where they’ve done much of their studies. Construction of an annex to the existing building, to accommodate the needed physical facilities, started a few months ago and is expected to be completed in April 2012. The first 11th graders will be admitted the following September. Ephpheta will graduate its first students in June 2014. We are very proud to be part of this exciting development for the school; more importantly, we’re happy for the students.

As I was leaving the anniversary celebration, one of the sisters asked me to comment in the guest book. I will only share with you the first sentence I wrote: “It is not humanly possible for any one person to visit Ephpheta, see the children and not leave his heart behind.”

Every time I visit Ephpheta, I have the same feeling. I’m sure you will feel that way, too, when you visit this wonderful school, a place that gives hope to those most disadvantaged in Palestinian society, a place that offers them a new lease on life through the gift of hearing, speaking and communicating. 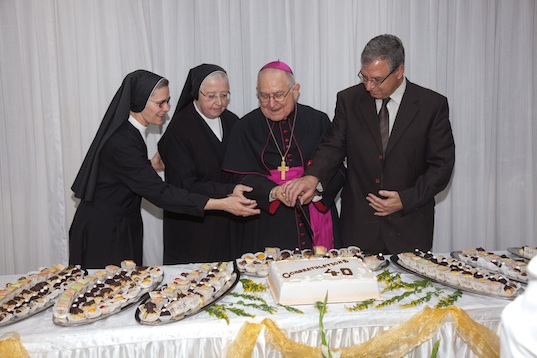 For more information on the Ephpheta Institute, click here. To learn more about how you can support the work of the Institute, follow this link.