Editor’s note: CNEWA Canada’s national director, Carl Hétu, is in the Holy Land participating in an annual fact-finding trip taken by Catholic bishops from Europe and North America to avail them of the current situation affecting the Christian community in the occupied Palestinian territories and Israel. He began his trip in Jerusalem, meeting with the Syriac Catholic community.

On Sunday, we visited one of the smallest of the Eastern churches in the Holy Land, the Syriac Catholic Church. The Syriac Catholic patriarchal vicar, Bishop Boutros Melki, serves some 30 families. The bishop spent more than 25 years serving a parish community in Montreal, Canada, and was named patriarchal vicar in 2004. Despite the lack of resources, he has renovated the patriarchate and made it into a residence for pilgrims. During the celebration of the Eucharist, Bishop Melki mentioned that Christians in the Holy Land only seek to be treated as equal — nothing less, nothing more.

Afterward, I had the occasion to meet with some families. A retired father passed on to his three sons a print shop in the city. Business is good, but for the families their primary concern is adequate housing. One of the sons told me he now has four children, but their tiny apartment is too small to rear the family. Finding housing in Jerusalem, he said, is next to impossible.

The next day, our group met with four leaders in the Christian community to discuss the issue in depth. One of the four was CNEWA’s own Sami El-Yousef, our regional director for Palestine and Israel. The four panelists confirmed that finding adequate housing plagues the community. The fact that it is expensive is one reason, but the issue is also political. The Jerusalem municipality isn’t that eager to have too many new apartments or houses being built for Palestinians, be they Christian or Muslim. It can take up to three years — usually more — to receive the appropriate construction permits on land that already belong to Christians. For Israeli citizens, it is a matter of months, they stated.

Without proper housing, these experts said that many Christians simply leave the region for areas where they can earn a living and bring up their families more comfortably. There is, however, some hope. Many churches in the city, including the Latin Patriarchate, the Lutheran diocese and the Franciscan Custody of the Holy Land, are all working hard to change the situation. They are purchasing land, applying for construction permits and building units that are offered to Christian families at affordable rates. Of the 11,400 Christians living in Jerusalem, said the Latin Patriarchal vicar, Bishop William Shomali, 400 families — about 1,600 people — are in an emergency situation regarding housing.

Paradoxically, the largest landowner in the region is the Greek Orthodox Patriarchate of Jerusalem. But most of the funds enabling the local churches to combat this housing shortage are from Europeans or North Americans through organizations such as CNEWA. 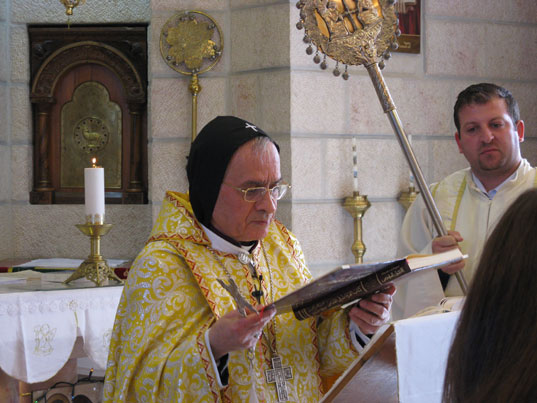