Cold has descended upon the plateau on which sits Gyumri, Armenia’s second-largest city. Located nearly 5,000 feet above sea level, the city has been swept by a dusty wind, its broad boulevards and low buildings offering little protection.

Before the great earthquake that devastated this region in December 1988 — killing more than 25,000 people — some 222,000 people lived in this cultural center, then known as Leninakan. Today, fewer than 146,000 remain. The population of the city, and the villages that surround it, continue to lose people as men seek work abroad as “seasonal migrants.” Some, said Anahit Mkhoyan of Caritas Armenia, settle first in Holland, then Belgium and finally France, rootless and distant from their families in Armenia. Some return, their children unfamiliar with the Armenian language, and Caritas has worked to reintegrate more than 150 families. Others leave for Russia.

“Usually, the men go as laborers, sending remittances back to their families,” she said, noting that 90 percent of Armenia’s gross domestic product is in the form of remittances. “But after a while, their families lose contact, as the men find Russian wives and begin another family.” 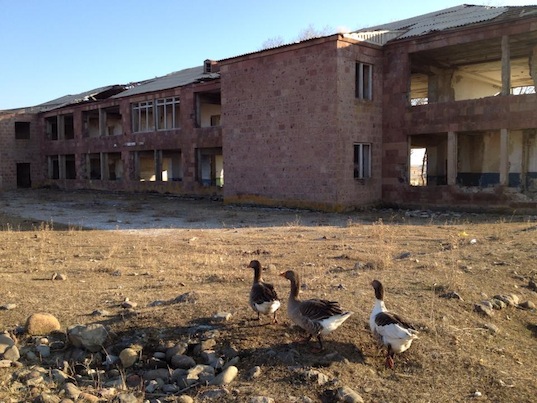 The depopulated region, dotted with ruined Soviet-era structures; the rugged, wind-swept landscape; and the arid weather and lack of vegetation belie the warmth and hospitality of the people. At a meeting of the Caritas team, after a rather depressing discussion about the region’s many problems — record levels of unemployment, a rise in HIV infections, emigration and more — one program manager said: “Those seated here are real Armenian patriots. This is our Motherland, and we can’t leave it.”

We first visited the construction site of the new Aregak Center for Children. A rehabilitation facility of Caritas for children with multiple disabilities, it has received funding from a number of donors, including the U.S. Conference of Catholic Bishops and CNEWA. Afterward, we visited the current facility, located in cramped quarters in a historic part of town.

The activities of the professionally trained team, assisted by a group of closely directed and carefully selected volunteers, include physical rehabilitation, art therapy, and basic education and exercises in communication for some 30 children. The new facility will expand the efforts to assist a hundred more. Stay tuned for more developments!

We later drove to the northernmost town in Armenia, Ashotzk, located in the Shirak region. There, we visited the Redemptoris Mater Hospital, which was built with funds from CNEWA and Caritas Italy and given by Pope John Paul II as a gift to the Armenian people after the 1988 earthquake.

“Natives of Shirak often refer to the area as the Armenian Siberia and consider themselves exiled from much of the country’s cultural and economic life, especially the prosperity many compatriots in Yerevan, the nation’s capital, have been enjoying in recent years,” wrote Gayane Abrahamyan in the pages of ONE magazine in March 2009:

Indeed, the gap between the socioeconomic development in Yerevan and the lethargy of Armenia’s rural, impoverished north widens by the day. Whereas newly constructed supermarkets, boutiques and luxury high-rise buildings illuminate Yerevan’s streets, the only signs of modern life in Ashotzk are the occasional car and Tiramayr Narek [Armenian for Redemptoris Mater] Hospital.

Ashotzk rises some 6,600 feet above sea level and is covered in three to five feet of snow six months out of the year. During the winter months, temperatures often drop to 40 degrees below zero and many of the roads are closed.

One road, known as the “life road,” is kept accessible throughout the winter and is used only in the case of medical emergencies. It extends 17 miles from the village of Berdashen, the neighboring community closest to Armenia’s northern border, directly to the hospital. Before the hospital commissioned the construction of the “life road,” residents had no way of reaching medical care in the winter months. To this day, residents still try to plan their pregnancies so that mothers give birth between the months of April and October.

The hospital is the cleanest facility I have ever entered. This, says Camillian Father Mario Cuccarollo, who administers the facility, is the work of Sister Noel. A Belgian Little Sister of Jesus, the petite Sister Noel runs a tight ship — I do not think I saw one scuff mark on the floor or walls. And it is busy, serving more than 150,000 patients annually from as far away as Gyumri (62 miles south) and Vardenis (124 miles southeast) to many of the Armenian populated villages in the southern Georgian region of Samtskhe-Javakheti. The hospital’s talented surgeons — including Dr. Sargis Vardanian, named the country’s leading surgeon in 2013 — conduct about 1,800 complicated surgeries per year.

But the hospital is in danger of closing, as Father Mario finds it increasingly difficult to find the million euros needed to keep it operating. This would be a tragedy, as the facility is the only one to offer excellent care in a wretchedly impoverished region for a nominal fee for those few who can pay — or gratis for most of those who cannot.

“Were it not for the hospital, people all around this region would be dead by now,” one woman told ONE in 2009.

“This is no exaggeration; they would not survive.”

After visiting the region, entering its stark and lifeless villages, traveling its unpaved “paved” roads and meeting its rugged people, I have no doubts about the effectiveness and necessity of the local church and its mission of accompanying a suffering people. Without these women and men I have been fortunate to meet — priest, religious and lay — these people would not survive. Indeed, this is no exaggeration.