The drive south from the Georgian capital of Tbilisi to the northern Armenian city of Gyumri on Saturday was nothing short of spectacular. At times the landscape looked lunar, with pockmarked hills barren of vegetation. Then, it changed; cattle grazed on mountainous plateaus and snow-capped peaks loomed in the background. High above the meadows, churches and chapels crowned with the distinctive conical dome of the region sprouted from the landscape, constructed from the tufa of the mountains. Breathtaking.

Anahit Mkhoyan, who directs Caritas Armenia, welcomed us at the border and led Thomas Varghese and me through two ancient monasteries, both marvels of architecture and art: Haghpat and Sanahin. Built on opposite mountains by master and student in the tenth century, the churches, chapels, libraries and refractories — all intact — speak of a highly sophisticated culture. 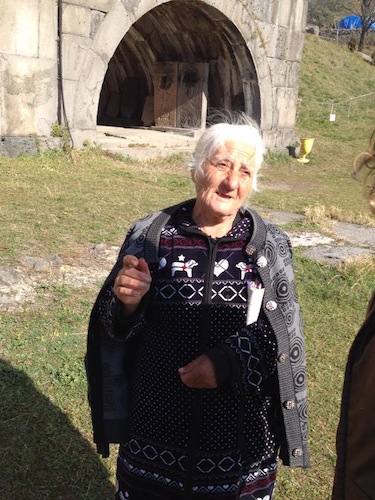 Located on the Silk Route at the crossroads of Asia and Europe, Armenia embraced Christianity in 301, becoming the first Christian nation. The Armenian Church severed relations with much of Christendom in the sixth century, largely to preserve the integrity of the Armenian nation, squeezed between Christian Byzantium and Zoroastrian Persia. But, as I wrote for ONE magazine in a profile of the Armenian Apostolic Church in 2006, the church:

Did not, however, demand the severance of commercial or cultural relationships with the Byzantine Empire, including the imperial church. For more than 400 years, trade between the two flourished. Byzantine emperors employed Armenian scribes, who flocked to Constantinople. Byzantine subjects served Armenian prelates and members of the nobility. Armenians engineered Byzantine defense systems and restored the dome of Haghia Sophia, the Great Church of Eastern Christendom. Armenians even ascended the Byzantine throne, establishing dynasties that supported the redevelopment of an independent Armenia, which cushioned the barrier between the Byzantine Christian and ascendant Arab Muslim worlds.

The liturgical rites of the medieval Armenian Church, particularly the Soorp Badarak, or Divine Liturgy, mirrored the cosmopolitan nature of Armenian ecclesiastical art and architecture: While historians suggest the supremacy of Syriac sources, they also recognize influences from the churches of Antioch, Cappadocia and Jerusalem.

Later, particularly during the time of the Crusades, the church “increasingly adopted Latin (Roman Catholic) customs and liturgical practices as contacts with the Catholic Church increased.”

Though located in a remote area of Armenia, the many churches and chapels of Haghpat and Sanahin contain the same features possessed by the churches in the former capital of Ani. Armenia’s famous cross stones, or khachkars, litter the grounds and are artistic marvels. One khachkar, known as the All Savior Cross, depicts a suffering Jesus hanging on the cross and has been standing in its place since 1273. The carvings, which feature intricate lines symbolizing eternal life carved from the tufa, remind me of the great Celtic crosses of Ireland and the Celtic manuscript miniatures of the early Irish church.

Later, over a sumptuous dinner of salads and grilled pork kebabs, Anahit stunned me when she said modern scholars believe Armenians and the Irish share a common Celtic lineage. As I look back at the filigree on the crosses, both in Armenia and Ireland, there can be no doubt.

On Sunday, Thomas and I were joined by Declan Murphy of the United States Conference for Catholic Bishops. After joining in the celebration of the Armenian Divine Liturgy at the chapel of the Armenian Catholic Ordinariate in Gyumri, we visited a multipurpose facility for children run by a true powerhouse: Sister Arousiag Sajonian, a “no nonsense nun” I have had the pleasure of knowing for some 16 years.

After a tour of the impressive facility dedicated to Our Lady of Armenia — which generous benefactors of CNEWA helped the sisters to build and equip — the center’s chorus gave a concert, combining traditional Armenian works with Gershwin tunes. The discipline of the voices, the harmonies and sounds created by the girls from all age groups were stunning. The choir and the work of the sisters here are all the more impressive in light of the fact that some of these girls were once homeless, others abandoned by fathers now living in Russia, while some were burdened by mothers engaged in the sex trade to feed their families.

Looking back on the cross stones that mark much of this proud but impoverished land, I am reminded about the redemptive power and meaning of the cross: love conquers death. Here, as exhibited by the Armenian Church — priests, sisters and lay people — love is conquering the evil of poverty and restoring the dignity of life.