On Wednesday morning, Thomas Varghese, Caritas’s program manager Liana Mkheidze and I began our two-day journey though the southwestern Georgian region of Samtskhe-Javakheti, which is predominantly populated by Armenians.

It is a desperately poor region with high unemployment, high rates of emigration, broken families, high rates of diabetes and cardiovascular disease, and little or no infrastructure — such as sewage treatment, irrigation and potable water, roads and the like.

“Armenians have suffered disproportionately, as they lack the lifeline of strong personal networks that mark Georgian society,” wrote CNEWA’s contributor in the Caucasus, Molly Corso, in the autumn edition of ONE. “Bad roads, fuel shortages, heavy snowfalls and a language barrier challenged relations with the Tbilisi-based government, isolating Armenian communities in the southern region.”

The roads would be a challenge for anyone, but Kakha, Caritas’s longtime driver, navigated the steep climbs, the mountain roads and paths, the mortar-like marked roads and the gelatinous mud with ease — that is, when he was not arguing with Liana about the speed.

We visited three Armenian Catholic villages: Eshtia, Ujmana and Bavra. Thomas described the scene as positively medieval. “Time has stood still here,” he said in disbelief. My colleague has seen poverty stretching from India through Eritrea and Ethiopia, but the isolation, the bleakness of the landscape and the wretched poverty made an impression, he said, that will be hard to forget.

Caritas sends mobile clinics to the region, said Gaioz Kubaneishvili, who manages socio-health care projects for the agency, which he says are well attended by the villagers. He also noted that they have brought a fresh water supply to several villages, and are looking to set up a youth program, too. But a Catholic aid agency — regardless of how extensive its resources — cannot make up for what the municipalities should be doing. The problems here are profound.

Families live hand to mouth. They tend small plots, planting crops that can survive the severe temperatures and short growing season. What little excess they may have any given year, perhaps some potatoes, cabbage or barley, they sell for what they cannot produce, such as sugar, rice or oil.

Julia Sirinyan of Bavra, who I dubbed the mukhtar (an elder in Arabic) of her village, noted, too, that many of the families in the region were deserted, broken by the departure of husbands and fathers who left for Russia, never to return.

“Russian women steal our husbands,” she said, “including mine.

“We have no husbands, no jobs … but,” she said, shaking the thoughts from her mind, “look at my beautiful village. It is beautiful, is it not?”

Looking out at the bleak landscape, I found it hard at first to agree. Sure, the setting was beautiful, but the mud, the monochromatic landscape, the open sewage canals and the stench of the place made me queasy.

But as we spent more time in the region — meeting the women who tend the churches in absence of a priest; taking tea and fresh bread with a family whose son was confined to wheelchair after an automobile accident, his dream of serving as a priest destroyed; listening to the passion of this driven woman who clearly is a lifeline to her neighbors — indeed, I saw the beauty of her village and her people.

“Please help me save my village,” she pleaded. “We survive only thanks to God’s help.”

I later asked Bishop Giuseppe Pasotto, apostolic administrator for Catholics in Georgia, how he sustained his priests from feeling overwhelmed in the face of such poverty.

“I honestly do not know,” he said frankly, “but we rely on visits such as yours to help us remember that we are not alone here, that we are a part of something much larger.”

That generous response, thanking CNEWA for visiting Georgia and taking the time to listen and learn, exemplifies the exquisite generosity of this land and its people. 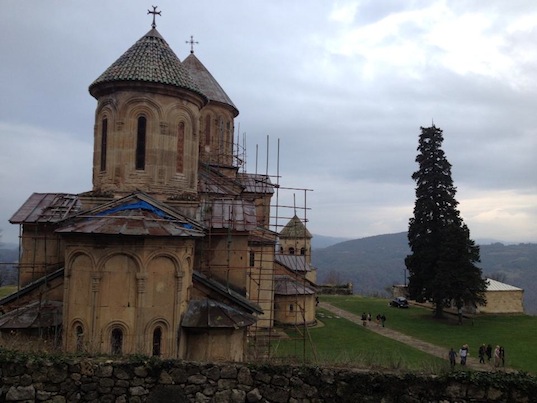 We ended our visit to the west of the country by visiting Gelati Monastery, located high above the city of Kutaisi. Built in the early 12th century by King David the Builder, it once housed an academy that rivaled Constantinople’s, then the center of Christendom.

Some of the mosaics and frescoes seen here date to its foundation and are masterpieces of Byzantine art.

The spectacular architecture, refined carvings and delicate frescoes reminded me of a few things: One, of the richness of this ancient culture in Middle Earth, and two, of a Russian proverb familiar even here: “Things survive what people do not.”