Yesterday’s drive from the northwestern city of Gyumri to the Armenian capital of Yerevan was another stunner. At one point, overcome with the natural beauty of the country, I said to myself: “God has kissed this land, but why such hardship?” I am not sure of the answer even as I write these words 24 hours later.

We spent our last day in Gyumri visiting two centers operated by Caritas Armenia, the official charity of the Armenian Catholic Church. The Primary Health Care Center operates in a modest facility near the center of town. Nevertheless, its two doctors have 1,807 registered patients who typically visit the clinic five times a year. Most of the patients waiting yesterday were pensioners. Some of their typical health concerns, said one doctor, are diabetes, high blood pressure, cardiovascular disease and underactive thyroid conditions.

The bustling clinic offers its services free of charge, thanks to its many donors. This is particularly important to the shrinking population centers in the country’s northern districts. While the population and economy in and around Yerevan are growing (largely due to international investments from financial institutions and assistance from donor agencies, as well as foreign remittances), the urban centers of the north, such as Gyumri and Vanadzor, are losing people as unemployment in some areas reaches more than 50 percent.

The many rusted Soviet-era factories that dot the landscape — damaged by the 1988 earthquake and shuttered permanently a few years later with the dissolution of the Soviet Union — indicate a once heavily industrialized economy offering full employment. Not unlike the so-called Rust Belt in the United States, such as my hometown of McKeesport, near Pittsburgh, these areas now offer few opportunities to the young, who are moving out, leaving behind an elderly population dependent on services such as those offered by Caritas Armenia.

Today, said Aida Khachatryan of Caritas, young adults and youths have few opportunities, and wile away their days doing little. Many of the people in the north of Armenia have no idea what to do, she said, adding that the earthquake and its aftermath created conditions of dependency and apathy that many find hard to escape. 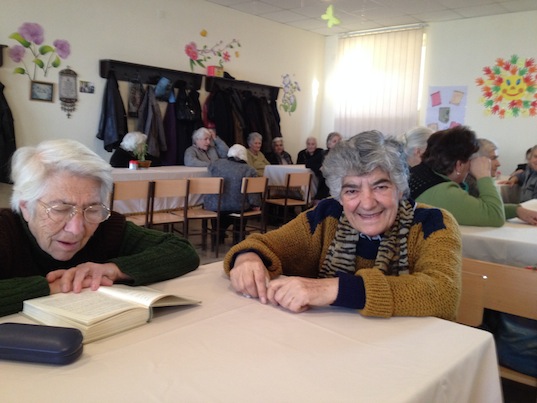 After visiting the clinic, we headed to a Caritas-supported day care center for the elderly run by Flora Sargsyan — “the soul of Caritas Armenia,” said its director, Anahit Mkhoyan. We arrived just as the center’s members were arriving. Tchaikovsky played on the radio as the women and few men hung up their coats, wiped down the tables, made conversation and prepared their places to sit for coffee or tea.

Mrs. Sargsyan, whose grandfather served as a priest in Vanadzor, looked on her friends with the loving eye of a mother, and tended their souls much as her grandfather did.

“So many of these people are left alone, with no family, no grandchildren to help care for them,” she said, as two young college students arrived to help her. The volunteers spend not just an occasional hour or two, she said, but work in the center regularly — as many as five days a week. The spirit of the place was energizing, spurring impromptu poetry recitals, the singing of folk songs and even traditional dance. An octogenarian woman pulled my colleagues into the circle, and CNEWA’s Thomas Varghese impressed the ladies with dance moves influenced by his Indian heritage.

Leaving the center smiling from ear to ear, we left Gyumri and traveled east to the town of Vanadzor, only to be reminded again of the sorrow of Armenia’s past.

As we climbed yet another mountain, we arrived at a bend of the road marked by a prominent monument and khachkars, or cross stone. There, Arevik Tumasyan of Caritas pointed to the “Gorge of Massacres,” a place where, during World War I, soldiers of the Ottoman Turkish Empire pushed tens of thousands of Armenian women and children into the gorge hundreds of feet below. While the subject of the Armenian Genocide has surfaced these days only in passing, this was our first encounter with it on Armenian soil. The site, much like the area’s emptied factories and villages, seemed ghostly, eerily quiet. We moved onward.

Arriving in Vanadzor, we spent some time at a child day care facility of Caritas Armenia: the Little Prince Center. The engaging team of social workers and psychologists met with us to discuss their demanding work with children, all of whom come from the poorest families in a community devastated by unemployment and “seasonal migration.” In addition, we met with a group of concerned parents and child care professionals who formed their own organization with the support of Caritas Armenia to provide tutoring and additional educational opportunities in conjunction with the Little Prince Program. Here, we found a child care program that cared for children’s emotional, psychological and spiritual well-being.

Toward sundown, we traveled to Yerevan via Lake Sevan, a spectacular lake some 6,200 feet above sea level. There, on a peninsula that was once an island, we visited two ninth-century churches, the major one dedicated to the Mother of God and the smaller dedicated to the Holy Apostles. The churches appeared quiet, if not solitary in the strong wind and the setting sun.

The peninsula and its churches resembled the ancient monasteries of Ireland and, for a while, as I traced my fingers through the gorgeous khachkar that marked the holy ground, I felt I was again transported to someplace wholly fantastical. Yet, just below the ancient churches, I could hear the sound of young men playing basketball.

Indeed, just feet from these holy sanctuaries, seminarians from the Armenian Apostolic Church — Sevan is the site of a seminary for the church — could be heard, playing a New World sport.