Msgr. John E. Kozar is the president of CNEWA.

Here is a report on a wonderful day of activities, centering on the longtime agricultural assistance given by CNEWA’s operating agency in the Middle East, the Pontifical Mission, to the Catholic community in Kobayat, a village in the northeastern part of the country.

After a full night of sleep, we headed out for a three-hour trip to the northeastern part of the country. As we traveled along Lebanon’s Mediterranean coast, our host, Issam Bishara, took us on a mini pilgrimage to an ancient shrine carved out of the rock.

Dedicated to Our Lady of the Light, the shrine is the fulfillment of a promise made in the fourth century to a pagan captain, whose ship was caught in the troubled seas. One of his sailors told him to pray to the Virgin Mary and she would intercede to God that he and all his shipmates might be saved.

And so it happened … his prayers were answered, he embraced the Christian faith and built a shrine to Mary to honor the great gift bestowed on him.

We left our car in the parking lot of a more modern monastery and began walking to the shrine down a path carved into the rocky surface of this mountaintop. We arrived at a heavenly site: Far in the distance stood Lebanon’s snow-capped mountains, below us a beautiful sea with clarity and a blue to feast the eyes, and best of all a magnificent little chapel literally carved into the stone like a cave. We paused and prayed. In just a few minutes, we had made a mini retreat. [You can read more about this shrine in an article profiled in our magazine in 2000.]

On to Kobayat. Our first stop here was the olive processing mill that was running at full tilt, even though the olive season has just about ended. We were warmly greeted by the president of the cooperative association that oversees the pooled efforts of hundreds of farmers as well as by friends and coworkers.

As the machinery hummed along, our hosts took us on a simple tour. They demonstrated how bags of olives brought in from outlying farms were sent through a series of machines and ended up a high quality olive oil. Needless to say, we had to each try a sample of the work.

What touched me the most about this operation and all the workers involved was their pride and appreciation to CNEWA and the Pontifical Mission for the abiding confidence placed in them and in their hard work. And, as Maronite Catholics, they expressed their gratitude that work such as this helped keep their faith-filled community alive. 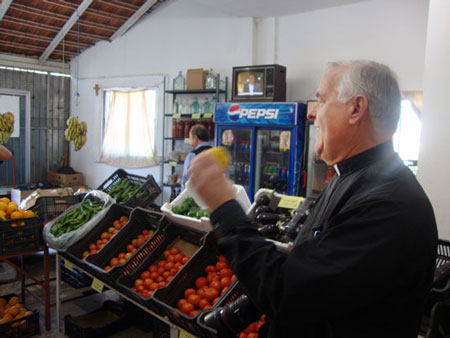 Our next stop was an impressive market center. This multipurpose center, built with the assistance of CNEWA, gives area farmers a well-situated venue to sell their produce, to store it in a clean and refrigerated environment, and a meeting area where agricultural and business professionals offer the farmers classes and presentations on new techniques of farming and management and marketing for their products. It was a special treat to witness customers coming in from the highway and buying local produce, and what a cornucopia of fruits and vegetables! Fresh has taken on new meaning — eat your hearts out supermarkets back home.

After visiting, we went to the parish church in the village of Martmoura, which is dedicated to an early Christian martyr named Moura. There, the parish priest and his parish committee warmly greeted us and escorted us into church to concelebrate with him the Divine Liturgy. For me, it was a special honor to concelebrate the Maronite eucharistic liturgy, or Qorbono in ancient Syriac, which was conducted in French, with some elements in Arabic and Syriac.

Now this is important: Perhaps the most impressive moment of the day during this pastoral visit with my farming friends was how important it was that we gather at the altar. The Eucharist was the focal point of their lives, and defines who they are as Maronite Catholics.

The underlying support of CNEWA all these many years has preserved this Catholic Christian farming community in the heart of the Middle East. Without the seed monies shared with them, and the abiding moral and technical support given to them, many would have fled, abandoning all that they knew in order to remain good farmers and good Christians.

They are grateful that we — and by this I mean our CNEWA family worldwide — have helped them to maintain their ancient Christian community.

After the liturgy we had a brief tour and a formal opening of a newly constructed parish multipurpose hall. Wouldn’t you know that the ladies had some delicious sweets ready for us and we toasted this “grand opening” and happy occasion with our glasses in hand.

But our hosts had one more treat for us: A never-ending meal with too many courses and plates to count. The food was superb, but the company was the best. Now that I have family in Kobayat, I promised to return. And, dear friends don’t forget, they are also part of your family.

Tomorrow, we travel East for another rural visit and more families to meet.

Below is a short video with a few highlights from our day.