Yesterday, the bishops participating in the Holy Land Coordination program visited the Israeli city of Haifa, where Israeli Christians, Jews and Muslims live side by side. We experienced a city that seems to revel in its complexity, where leaders, teachers, parents and children of all faiths and ethnic groups decided to go beyond the traditional speeches about achieving peace. They agreed to learn, teach, live and play together.

Yet even here, the temptation exists to associate a particular religion to a behavior or attitude. This temptation to label is very dangerous; it inflames doubts and suspicions in a region plagued with conflict and violence, and reinforces the idea that religion is part of the Middle East’s problem.

We came here to see for ourselves how religion heals the injustices of failed political policies. We met with our good friend, Archbishop Elias Chacour, the Melkite Greek Catholic Archbishop of Akko, Haifa, Nazareth and All Galilee, who, while visiting Ottawa last October, mentioned the success of his school in the Israeli village of Ibilin. There, Christian, Druze, Jewish and Muslim students attend the same school.

We had the occasion to meet teachers and religious leaders of a number of faiths present in Haifa, all of whom reminded us that much is needed to instill the necessity of coexistence and mutual respect with tomorrow’s leaders. All agreed that education was the key to peace and that a proper space is needed where all faiths can be together as one while respecting the other’s differences. Interestingly enough, this was the theme of Pope Benedict XVI’s message of peace this past 1 January. It left us with something to think about.

Indeed, two days before I left for Jerusalem, the only mosque in my home town of Gatineau in Quebec was vandalized for the second time in two weeks. Even though Muslims represent less than .5 percent of our population, a minority of people fears their presence.

Yes, we must help parts of the world like the Middle East, but are we not falling into the same trap of intolerance and labeling here in North America? If I am reaching out to Muslims, Jews and Christians in the Middle East, should I not do the same in my home town? 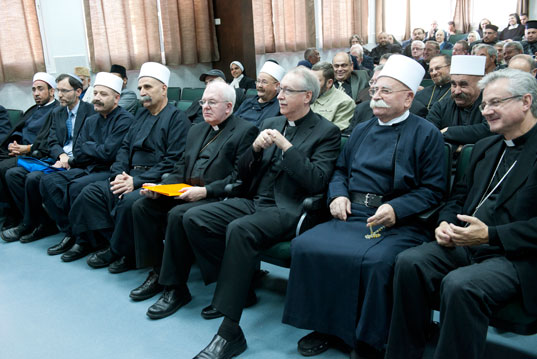